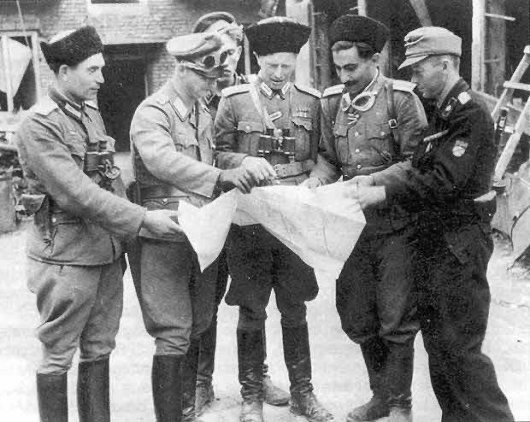 The first from the left in the photo is Lieutenant Vladimir PUTIN, and the other two in Cossack caps are Major FROLOV and Lieutenant MYKHALCHEVSKY.

Vladimir Spiridonovich PUTIN, the father of the current President of Ruzzia Vladimir Vladimirovich PUTIN, was an officer of the internal troops of the NKVD (later KGB and current FSB) until 1941. At the beginning of the WWII, he surrendered to the Germans near Vitebsk, and when General Andrey VLASOV created the collaborationist army, he voluntarily joined in. As part of the Vlasov formations, together with the Germans, he participated in punitive actions against the Polish population. In 1945, V.S. PUTIN was captured by the British. Documents testifying to this are in the secret English archives in London, where they were discovered by Viktor SUVOROV.

In 1945, V.S. PUTIN, along with the rest of Vlasov regiment, was extradited by the British to the Soviet Union. His son, the current president of Russia, followed his father’s footsteps.

From the age of 18, Putin served in the KGB (the KGB is the successor of the NKVD), where he rose to a high position – the rank of colonel.

President Vladimirovich Vladimirovich PUTIN pursues a pro-German policy in Russia in the spirit of the RIBBENTROP-MOLOTOV treaty of 1939.

During the last visit to Poland in 2002, there was a diplomatic incident. Russian President PUTIN refused to lay a wreath at the monument to the Polish resistance fighters together with representatives of the Diet. And only after the scandal in the press, at the end of the visit, was a personal laying of “bundles” of flowers carried out. And without an official ceremony…”.